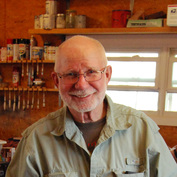 John Wilkinson has been a craftsman of some sort for all of his life. He began selling his lures at small marketplaces around 2009 and has been perfecting his designs every year since then. The lures are created as replicas of the "lures of yesteryear," as John calls them.

The designs are those of the iconic lures that prevailed even to today. He has followed the original designs down to the millimeter. The paints and stainless steel hardware of the present are, however, far superior to those of the early 1900's.

When it comes down to it, wooden lures have worked for hundreds of years and will continue to for hundreds more. They may be pretty, and they may seem like they should only be placed on a mantle to be admired, but they deserve the adrenaline pumping excitement of hauling in a whopping large-mouth bass or muskie before they are resigned to the mantle. John believes in these lures, just as many have before him. As he says, "they just work."
​
​Featured in South Florida Opulence ​magazine.
​Featured in Sixthday Sportsmen Magazine
SHOP NOW